Titre VO
Chuck Versus the Zoom 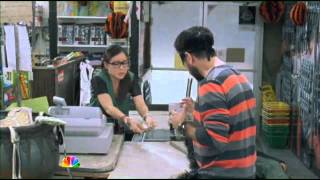 vo: i'm not leaving my husband in a mission 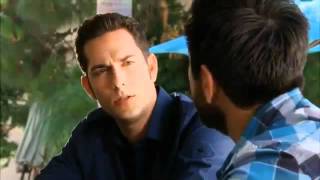 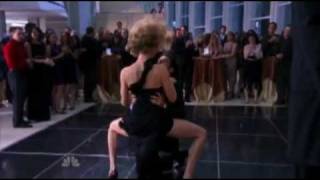 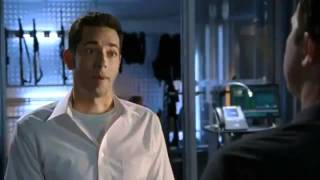 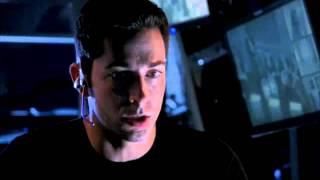 Chuck and Sarah stand on the cliffside balcony of an opulent home, surveying a magnificent ocean view. Chuck asks Sarah if it's the sort of house she'd love; she responds that she's more of "toes in the sand kind of girl." Chuck takes note, but they both realize the conversation is premature. They're about to executed by the armed henchmen of Jeanne Claude, a villain who has stolen their client's precious vase.

Sarah and Chuck hold out hope that Casey will rescue them, but he's soon brought in at gunpoint by more goons. Their only hope now is Morgan, who's been instructed to remain in the van outside. Sarah secretly signals him for a rescue. Equipped with the Intersect, Morgan quickly but clumsily finds his way inside and confronts Jeanne Claude and his toughs. Morgan flashes on kung-fu fighting skills and begins dispatching the bad guys in a flurry of kicks, punches and jumps. Chuck announces to Jeanne Claude that his team has just been neutralized, thanks to Carmichael Industries, spies for hire. It's a perfect ending, ruined only by the sound of Morgan dropping the priceless vase on the tile balcony.

The team regroups at Castle, now the headquarters of Carmichael Industries. Sarah has concerning financial news: despite a huge windfall given to them after they brought down Volkoff Industries, their cash flow is not great. A private plane, weapons, bullets, shrimp - it's all adding up. The Ming vase was to be their payment for the previous assignment (the micro-chip inside was all their client was after); Morgan unsuccessfully tries to put it back together. It's clear they need another client and quickly.

Morgan and Chuck walk the aisles of the Buy More; Morgan remains the manager, while Chuck is the new owner. They discuss Chuck's plan to surprise Sarah by buying her the house of her dreams. Chuck explains that his first idea - a home with a view - isn't quite right; Sarah wants to be right on the shore. Morgan resets himself on the house hunt; he names the search Operation Toes in the Sand (aka T.I.T.S.). Chuck tells him to keep searching. He's not concerned about their finances; there's a new client coming by soon to discuss a project. As it turns out, the new client is already downstairs. Casey has taken the undiplomatic security precaution of subduing him and duct-taping his mouth shut.

The client explains that he was scammed out of $20 million by a Ponzi scheme artist named Roger Bale. Bale's eluded prosecution and the client wants team Carmichael to infiltrate Bale's St. Martin's mansion, access his computer servers and transfer the monies back to his victims. The team jumps on the opportunity and flies to the Caribbean to evaluate the situation.

Poolside, Morgan and Chuck continue their discussion about finding Sarah's dream house. They notice Bale at a nearby table and Morgan "zooms" (flashes) that Bale's got a squash game at an exclusive club nearby. They decide it's the perfect opportunity to get into Bale's inner circle. Chuck asks Morgan about the term "zoom" - and he explains that he came up with his own term so as to differentiate himself from Chuck's "flashes." He asks Chuck whether he misses having the Intersect. Chuck says he's okay without it. But later we see Chuck and Ellie considering the Intersect glasses; he really wants to know if there might be one more transfer left in them. Ellie tells him she's sorry, but this version of the Intersect is a one shot deal.

Back at HQ, Chuck outlines the plan for the team: they'll take Bale's phone and install a virus on it that will put Chuck on the guest list for Bale's upcoming party. Once inside his house, they'll access his servers and transfer their client's money out of Bale's account before he ever knows it's gone. The first step involves Chuck delaying Bale's planned squash partner, Jim Burnham. Chuck will pose as a massage therapist and keep Burnham tied up. Meanwhile Morgan, posing as Michael Carmichael, will substitute himself in a match with Bale so that Casey can break into Bale's locker and install the virus on his phone.

The plan starts smoothly. But as Casey finishes installing the virus on Bale's phone, he's interrupted by Bale's bodyguard; Sarah tells Chuck over comms to get ready to tranquilize Burnham and go help Casey. But Chuck's hands are slippery from the massage oil and he can't grip his gun. Burnham now knows something's up and begins beating Chuck. Chuck puts several tranq darts in him, but they don't knock him out. Casey talks his way past Bale's bodyguard and comes to rescue Chuck, knocking Burnham out. Meanwhile, Morgan has charmed Bale by posing as a potential investor. Bale invites him and Sarah to his party the next night. They accept.

Back at the Buy More, Chuck and Morgan realize that something's up. A sign over the Nerd Herd desk reads "Save Jeff Barnes" - and people seem to be donating money into a large jar. Jeff, wearing a neck brace, whizzes by in a motorized wheelchair. It has all the markings of a scam perpetrated by Jeff and Lester. And indeed it is. Though Lester explains to them that Jeff was paralyzed when he was trampled by crazed customers stampeding the store for a Justin Bieber doll, Chuck and Morgan know better. They consider a trap to catch Jeff in his lie but then realize they don't need a trap. Jeff gets up out of the chair to restock a shelf. While Lester tries to pass it off as a miracle, Chuck and Morgan warn them: give back all the money they've collected or go to jail. Chuck and Morgan agree that they need to spend more time at the Buy More.

The team mobilizes for the party at Bale's. Morgan and Sarah are dressed to the nines; Casey accompanies them as security while Chuck quarterbacks the mission from the van. They spot Bale at the party. He takes an immediate shine to Sarah. As he gropes her, she promptly pickpocket's Bale's security key card, then secretly hands it to Casey who heads down the hallway to find the vault where the servers are located. Morgan zooms and leads Sarah to the dance floor. Powered by the Intersect, his salsa dancing skills are impressive.

As the crowd is awed by Morgan and Sarah's dance moves, Casey enters the server room and, guided by Chuck on comms, begins transferring monies back to their original owners. In the van Chuck marvels over how smoothly it's all going. Until it's not. Suddenly the face of Clyde Decker, CIA uber-operative, pops up on one of his screens. He explains to Chuck that he'll be taking control of the transfers now.

At the party, the jig is up. Bale confronts Sarah, Casey and Morgan about the missing key card and leads them downstairs. Sarah warns Bale that he'll never have access to his accounts if they're harmed. Bale scoffs and demands that a computer expert be brought in to reverse the damage they've done. Did someone call for a computer expert? Chuck, even without the Intersect, is suddenly the critical man in the equation. Nerd tool case in hand, he shows up at casa de Bale.

Chuck explains to Bale that an outside computer has accessed his system - but that he has stopped it. Relieved, Bale instructs his men to now kill Chuck. Chuck leaps up and grabs two sets of data cables, explaining that if he pulls them out, the firewall goes down and the CIA accesses his files in seconds. Bale realizes this is no ordinary IT nerd. Chuck explains that he's Charles Carmichael and that if Bale doesn't let the others go (Morgan, Casey and Sarah), he'll pull the plugs and Bale will lose his fortune immediately. Bale's henchman let Casey, Sarah and Morgan go free, but they hold Chuck. Over the comms, Chuck tells them to leave him behind.

Back in the van, Casey, Morgan and Sarah realize that Chuck has left them a message with explicit instructions on how to kill the security and power inside. They trip the switch. In the dark, chaotic scene inside the server room, Chuck makes a break for it. He leaps from an upper floor, landing perfectly on the van parked outside.

Back at Carmichael headquarters, the team comes to grips with some bad news. When Decker took control of the asset transfer, he seized all of their accounts as well. They're practically broke. Chuck's heartbroken: he had found the perfect house for his new wife's dreams - but now he can't afford it. Sarah finds him staring wistfully at the empty home. Sarah comforts her husband, explaining that they'll bounce back. They still have the Buy More, she tells him. Chuck's mood lightens: they can use the Buy More to support the spy team. As long as the store can turn a profit, there's hope after all. Sarah reassures him that he's the team's leader, and she has ultimate faith in him.

As Chuck and Sarah embrace, we notice that they're being surveilled. It's Decker's men. We see the evil spook addressing a team of CIA managers. He explains the importance of his mission to take down Chuck. It's the final chapter of the plan, he tells his men. Nothing can stop it. 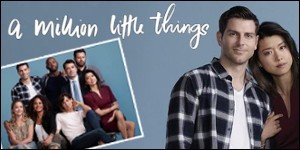 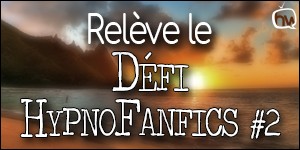 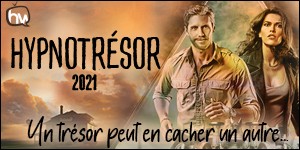